Just signed up for this…

They send you a super cool beautifully packaged box every 2 months filled with food, recipes, and info about a country. The recipes are easy and the weird ingredients are supplied, you just need to pick up standard pantry and fresh items from the grocery store. The website also has lots of cool info and additional recipes for each country and you can buy more of the same items from your box or other items from that country. 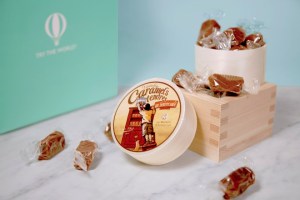 This was a bonus box because I signed up during a promotion they were having. The box comes with little jars and packages and a beautiful card with info about he country and recipes. I didn’t follow the recipe precisely, because well I just don’t do that. But also because it was steak tartar and I’m not a fan of raw red meat. Yes, I understand the point of this is to try stuff you’ve never tried but I’m making another point to not be afraid. If the recipe they include is just not going to happen for you, it’s not that hard to switch things up.

So I stuck with the tea set up. They provided the tea, delicious butter cookies and dark caramels. I added honey to sweeten the tea. 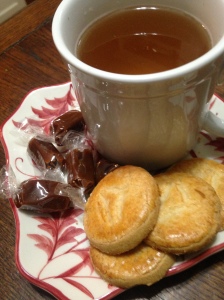 For the entrée though instead of steak tartar is made a French tartine, or open faced sandwich on a baguette.

Toasted the baguette
Mixed the supplied Dijon mustard and clementine jam
to make a spread for the baguette
Spread the Dijon on skinless boneless chicken breasts that I cut in half, then I sprinkled each breast with the mixed herbs
included in the box and the fleur de sel
Pan seared the breasts
Topped one side of the baguette with 2 breasts halves, topped with slices of gruyere cheese and broiled it a few minutes to melt the cheese
Topped that with a fresh thyme sprig, thinly sliced radishes
and sliced green onion
Drizzle with olive oil and salt and pepper
I served it with pan seared asparagus that I drizzled with the same Dijon clementine spread and fleur de sel 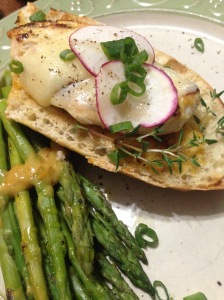 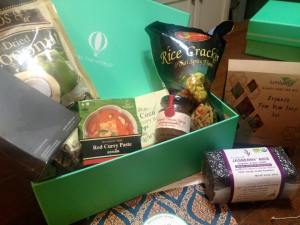 The soup was a bust – you get 4 little packets of dried vegetables that you drop into boiling water (I used broth instead) then add meat and fresh mushrooms and onions. The vegetables never softened up. I mean we didn’t even taste it because the vegetables all felt like bark.

The rice crackers and dried coconut was awesome. Haven’t tried the tea sweetened with coconut syrup yet.

The coconut milk red curry beef with vegies was delicious.

Combine the provided red curry paste with a couple of spoonful’s of the solid coconut in the can of coconut milk
Then stir the rest into the water in the can
Warm the paste and the milk solid then add the rest of the can of milk along with lime zest and a tablespoon of fish sauce
Add shredded carrots and thinly sliced beef skirt – cook for about 20 minutes or until tender
Add sliced red peppers and green onions
Cook the purple jasmine rice according to the package (I used coconut milk and broth instead of water)
Serve the beef over the rice – Really really good.

I added a mango cucumber and red bell pepper salad as well. 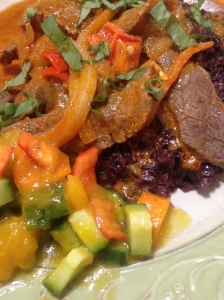 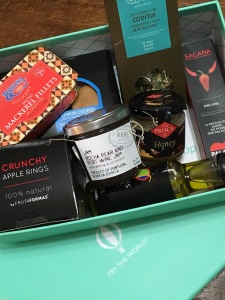 Not a fan of this box. Lots of dried fish stuff. The crunchy apple rings were definitely not crunchy. They were tough like leather. The cookies, honey, and jam were good nothing unusual though. The lemon cookies tasted like vanilla wafers and the jam and honey like, well, jam and honey. Had them with tea.

I used the sacana and fish seasoning to make cod. With the suggested chorizo, kale, peppers and tomatoes. Lots of flavor with a little kick. Definitely liked this part. 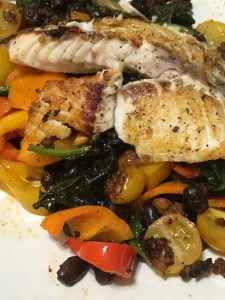 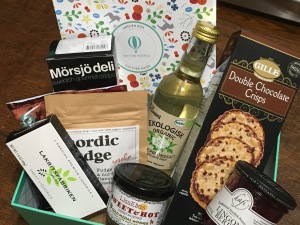 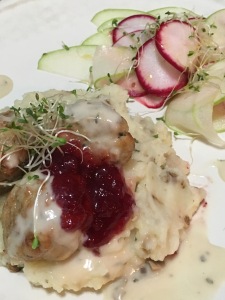 Swedish meatballs with lingonberries over mashed potatoes and a shaved apple, radish and onion sprout salad. This was really tasty and they have almost the same thing without the apple salad at Epcot in Norway at the little bakery. Its actually really good. 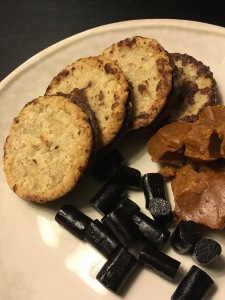 Crispy chocolate cookies, licorice and nordic fudge with rosehip. Don’t like licorice or fudge and this wasn’t any different. The cookies tasted like Pepperidge Farms. So far the savory stuff is pretty good but the sweet stuff is boxed just like our stuff. 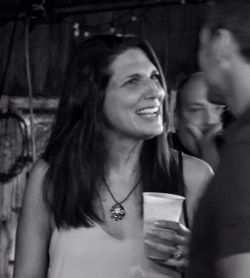